论文题目：Associations between Novel and Legacy Per- and Polyfluoroalkyl Substances in Human Serum and Thyroid Cancer: A Case and Healthy Population in Shandong Province, East China

论文摘要：Per- and polyfluoroalkyl substances (PFASs) are widely detected in the environment and may cause adverse human health effects after exposure. Studies on the effect of PFASs on some health end points, including cancer, are still limited and show inconsistent results. In this research, 319 participants were recruited from Shandong Province, East China, consisting of patients with thyroid cancer and healthy controls. Seven novel and legacy PFASs were frequently detected (detection rate > 75%) in the serum samples of the participants. The concentrations of perfluorooctanoic acid (PFOA) were the highest in the case and control groups. Males showed significantly higher concentrations of PFASs than females. Exposure to PFASs was inversely associated with the risk of thyroid cancer. In the control group, we identified significant positive associations between PFASs and free thyroxine (FT4) as well as between PFOA and thyroid stimulating hormone (TSH) in females. A significant negative association between perfluorononanoic acid (PFNA) and triiodothyronine (T3) was observed in males. Our results suggest that exposure to certain PFASs could interfere with thyroid function. To our knowledge, this is the first case–control study demonstrating associations between novel and legacy PFASs in human and thyroid cancer. 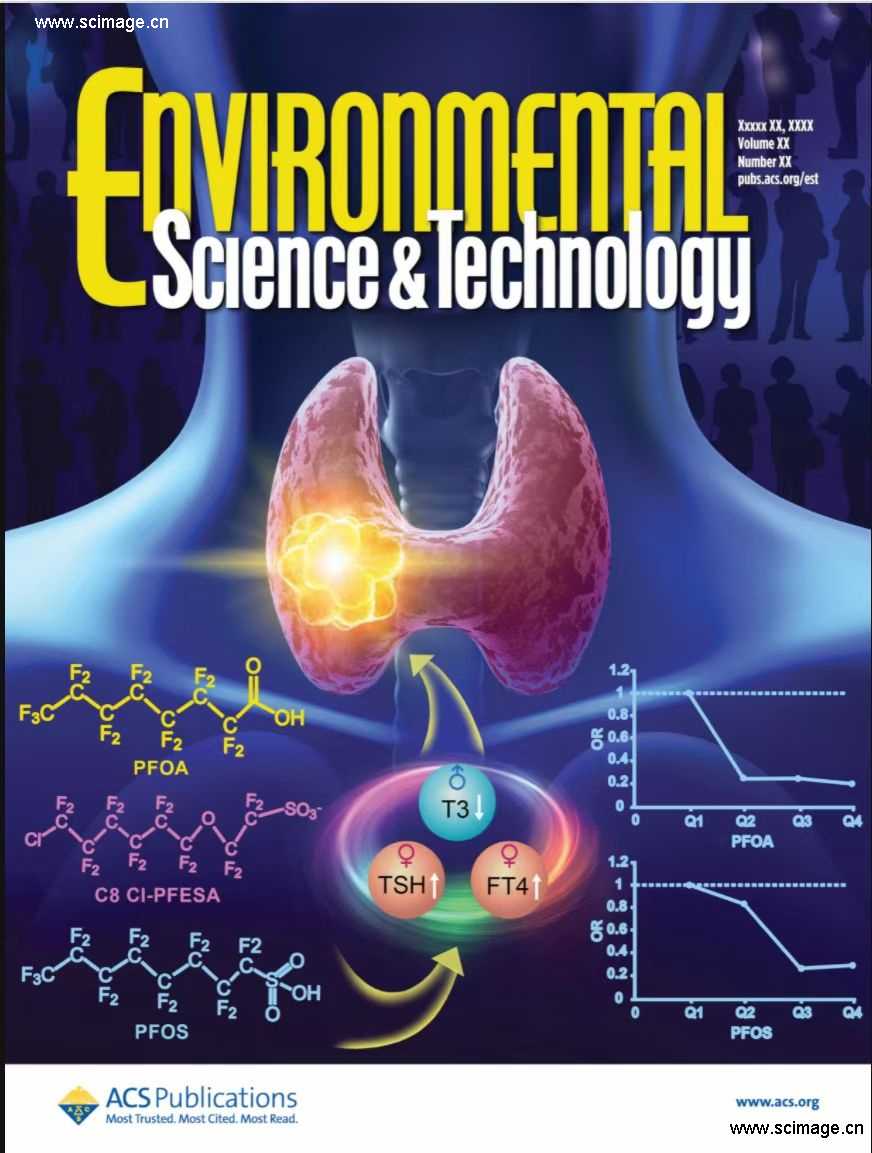 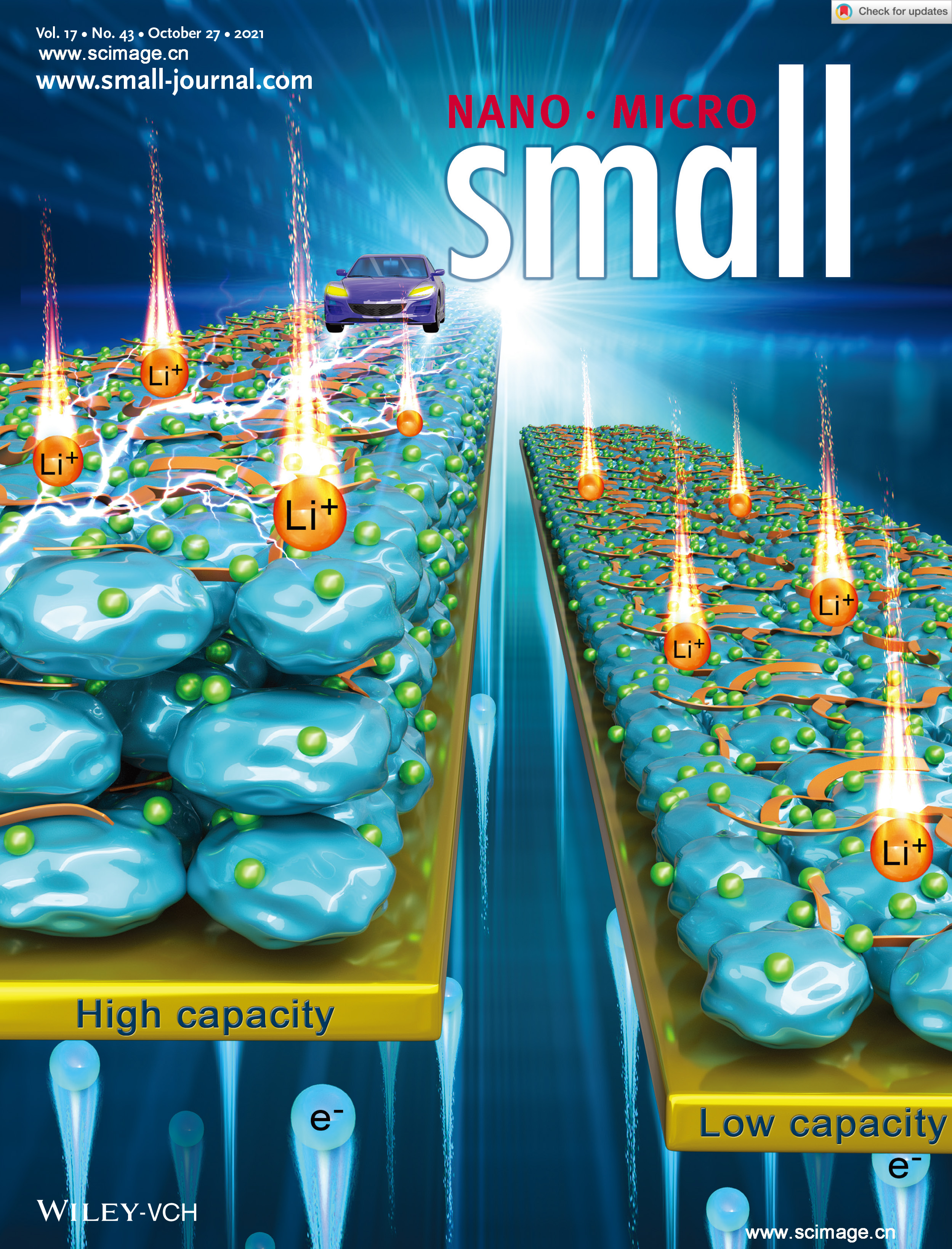 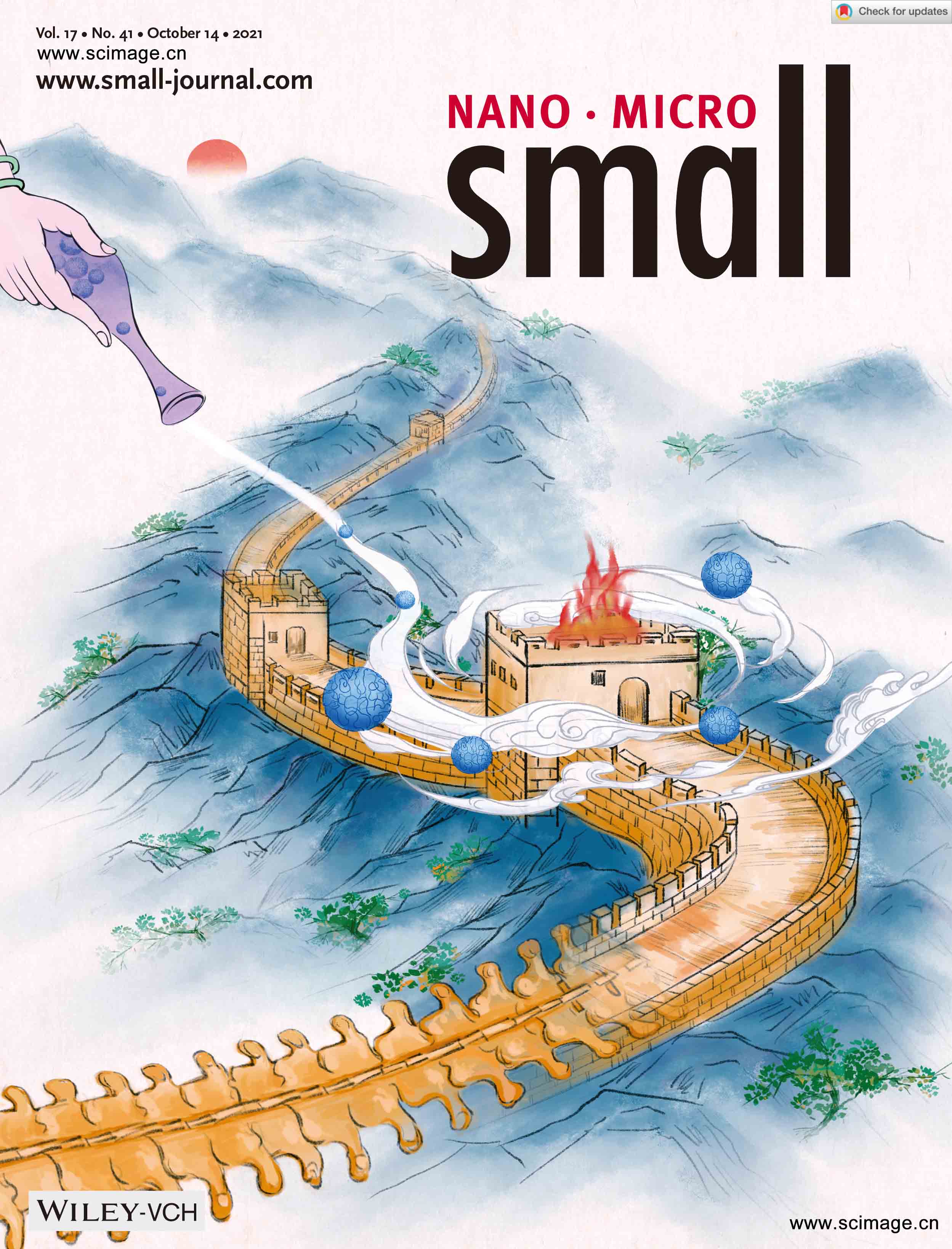 论文摘要：MXenes are a family of layered two-dimensional metal carbides and nitrides with interesting properties that can be lost if voids are formed during synthesis. By using a sequential combination of hydrogen and covalent bonding agents, Wan et al. were able to densify the layered structure and remove voids. This procedure led to improvements in the mechanical strength and toughness, electrical conductivity, and shielding from electromagnetic interference. 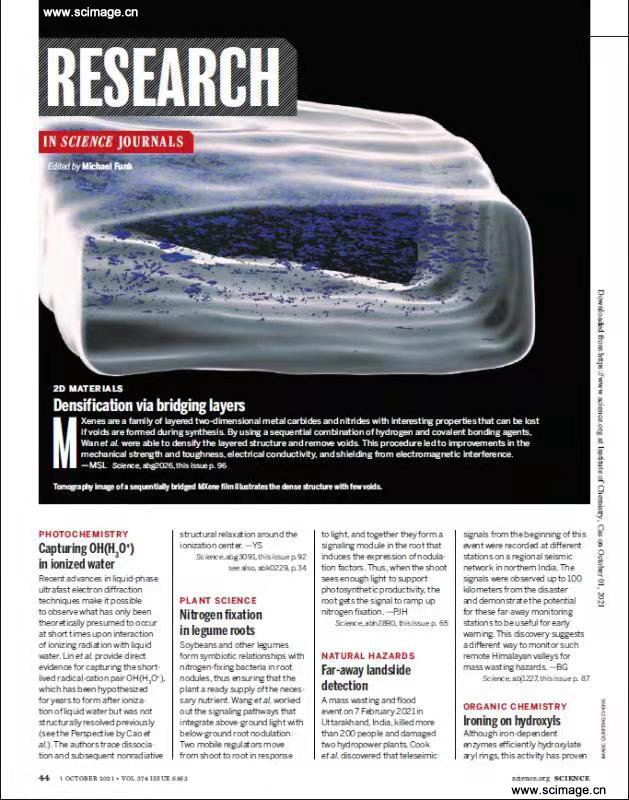 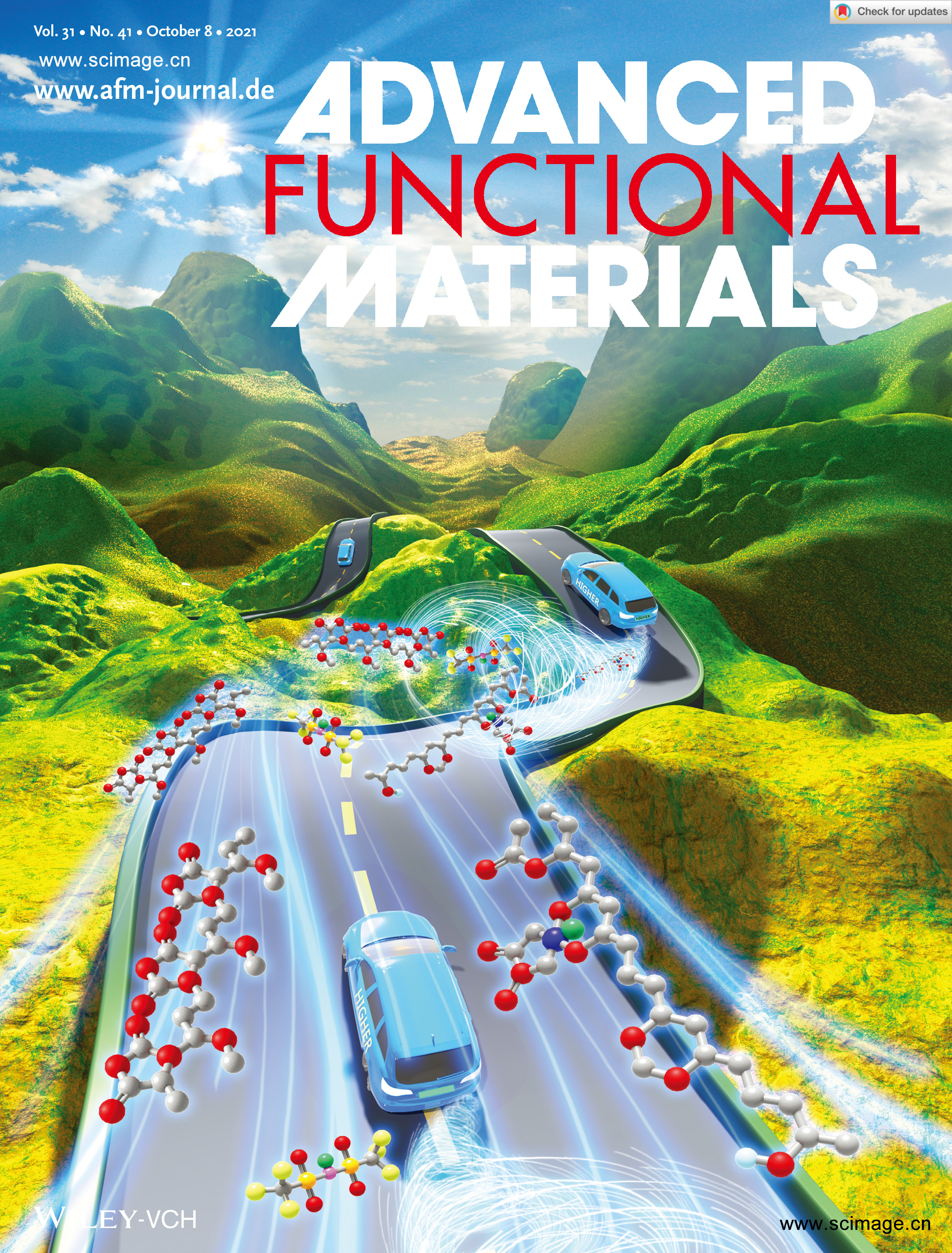 论文摘要：The activity of Mo2C-based catalyst on vegetable oil conversion into biofuel could be greatedly promoted by tuning the carbon content, while its modification mechanism on the surface properties remained elusive. Herein, the exposed active sites, the particle size and Lewis acid amount of Ni-Mo2C/MCM-41 catalysts were regulated by varying CH4 content in carbonization gas. The activity of Ni-Mo2C/MCM-41 catalysts in jatropha oil (JO) conversion showed a volcano-like trend over the catalysts with increasing CH4 content from 15% to 50% in the preparation process. The one prepared by 25% CH4 content (Ni-Mo2C(25)/MCM-41) exhibited the outstanding catalytic performance with 83.9 wt% biofuel yield and 95.2% C15–C18 selectivity. Such a variation of activity was ascribed to the most exposed active sites, the smallest particle size, and the lowest Lewis acid amount from Ni0 on the Ni-Mo2C(25)/MCM-41 catalyst surface. Moreover, the Ni-Mo2C(25)/MCM-41 catalyst could also effectively catalyze the conversion of crude waste cooking oil (WCO) into green diesel. This study offers an effective strategy to improve catalytic performance of molybdenum carbide catalyst on vegetable oil conversion. 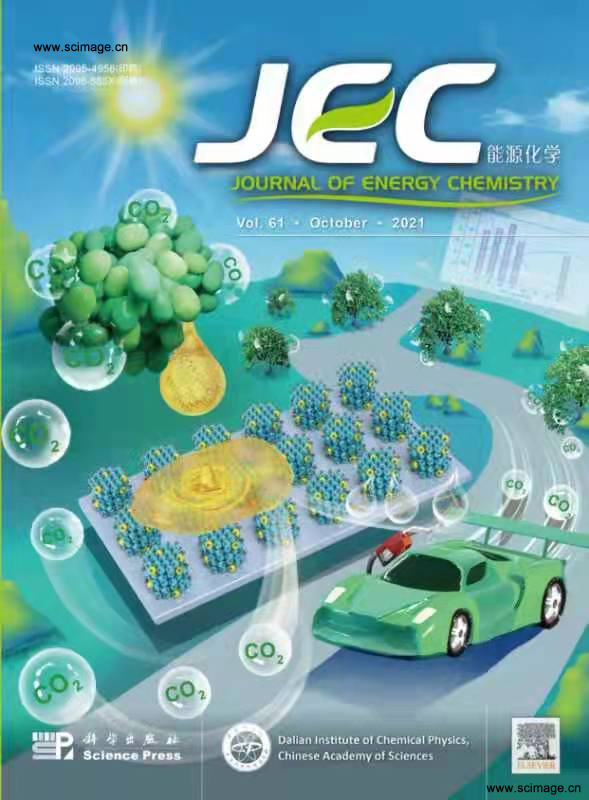 论文摘要：All-inorganic CsPbBr3-based perovskite solar cells (PSCs) have attracted great attention because of their high chemical and thermal stabilities in ambient air. However, the short-circuit current density (Jsc) of CsPbBr3-based PSCs is inadequate under solar illumination because of the wide bandgap, inefficient charge extraction and recombination loss, leading to lower power-conversion efficiencies (PCEs). It is envisaged that in addition to narrowing the bandgap by alloying, Jsc of the PSCs could be enhanced by effective improvement of electron transportation, suppression of charge recombination at the interface between the perovskite and electron transporting layer (ETL), and tuning of the space charge field in the device. In this work, Nb-doped SnO2 films as ETLs in the CsPbBr3-based PSCs have been deposited at room temperature by high target utilization sputtering (HiTUS). Through optimizing the Nb doping level alone, the Jsc was increased by nearly 19%, from 7.51 to 8.92 mA·cm−2 and the PCE was enhanced by 27% from 6.73% to 8.54%. The overall benefit by replacing the spin-coated SnO2 with sputtered SnO2 with Nb doping was up to 39% increase in Jsc and 62% increase in PCE. Moreover, the PCE of the optimized device showed negligible degradation over exposure to ambient environment (T ˜ 25 °C, RH˜45%), with 95.4% of the original PCE being maintained after storing the device for 1200 h. 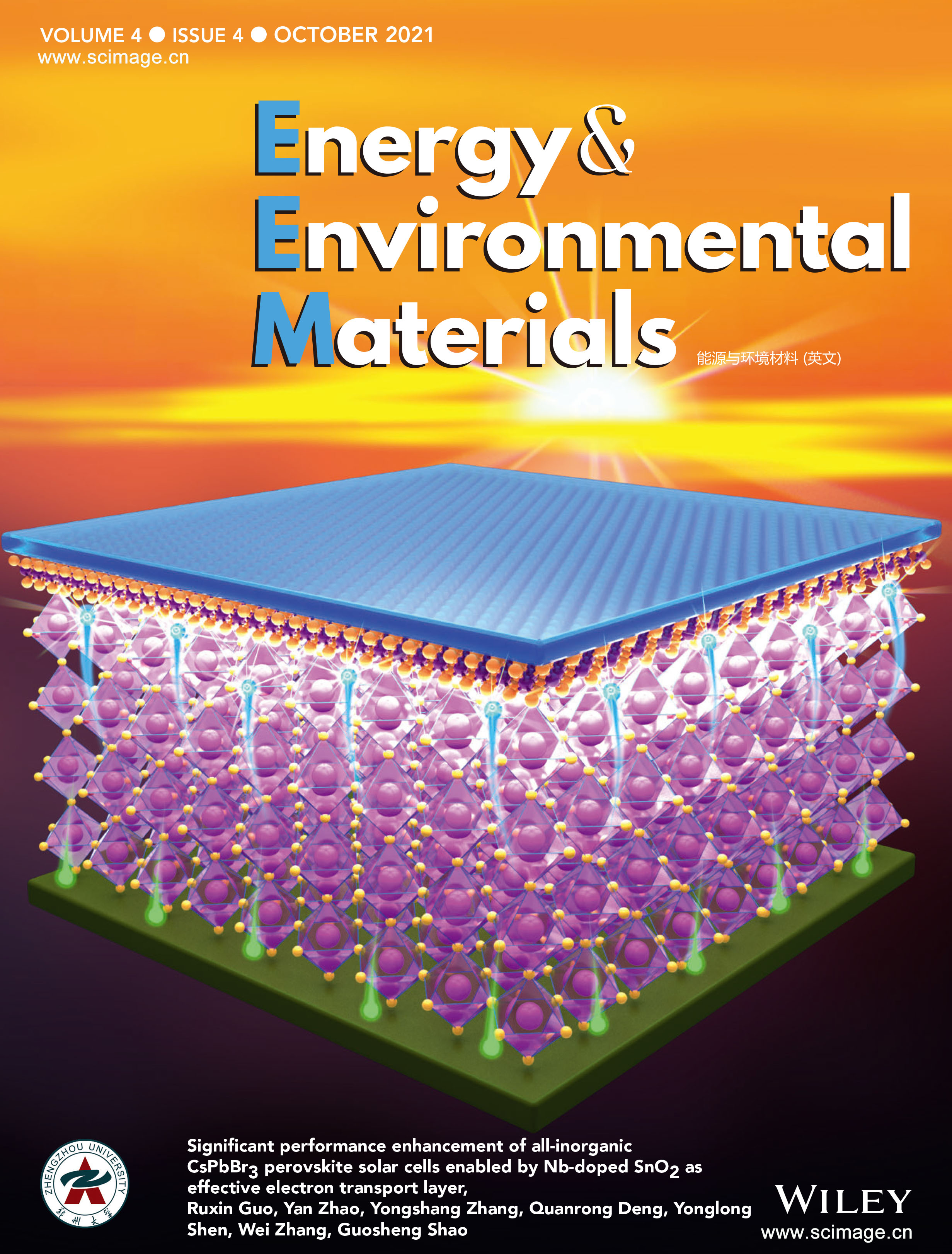 论文摘要：Porous materials are very promising for the development of cost- and energy-efficient separation processes, such as for the purification of ethylene from ethylene/ethane mixture—an important but currently challenging industrial process. Here we report a microporous hydrogen-bonded organic framework that takes up ethylene with very good selectivity over ethane through a gating mechanism. The material consists of tetracyano-bicarbazole building blocks held together through intermolecular CN···H–C hydrogen bonding interactions, and forms as a threefold-interpenetrated framework with pores of suitable size for the selective capture of ethylene. The hydrogen-bonded organic framework exhibits a gating mechanism in which the threshold pressure required for guest uptake varies with the temperature. Ethylene/ethane separation is validated by breakthrough experiments with high purity of ethylene (99.1%) at 333 K. Hydrogen-bonded organic frameworks are usually not robust, yet this material was stable under harsh conditions, including exposure to strong acidity, basicity and a variety of highly polar solvents. 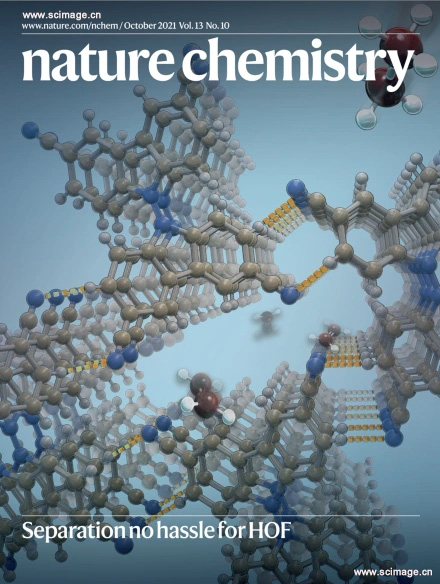