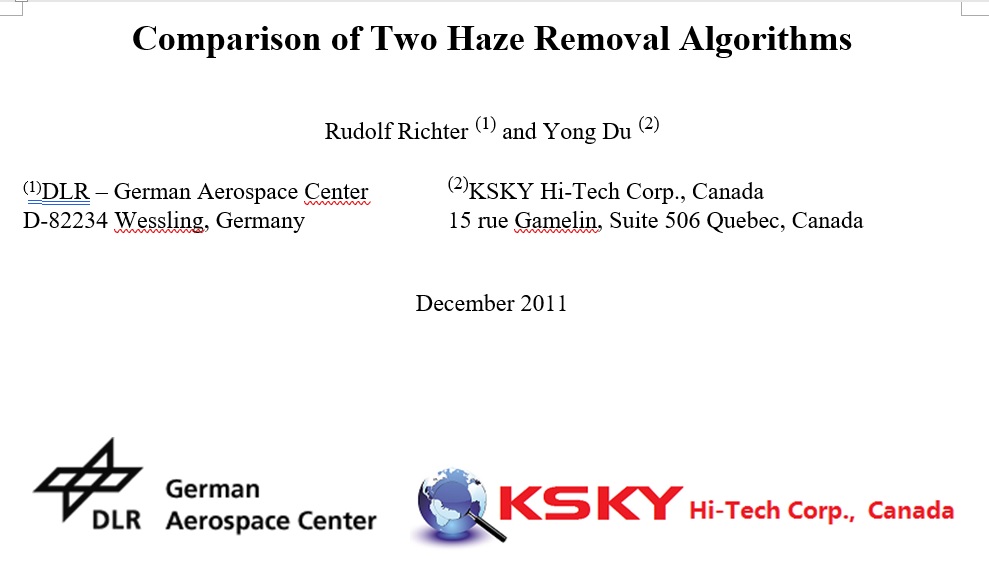 Dr. Yong Du visited DLR November 17 – 23, 2011, to exchange ideas and initiate a first comparison of the haze removal method developed by him and the method implemented in ATCOR. This technical note summarizes the results obtained with four hazy scenes during this period.

We selected small subsets of scenes acquired by the sensors Landsat-5 TM, Landsat-7 ETM, and ALOS/AVNIR-2. The spatial resolution of the Landsat sensors is 30 m, and the AVNIR-2 instrument has a 10 m resolution.

Only the first three bands (blue, green, red) were processed concerning haze removal, because the haze effect is strongest in the visible part of the spectrum. Results are presented as de-hazed imagery and histograms before and after haze removal.

The four scenes are:

As the CMSAT technique does not need any additional data, the metadata information is not listed here. However, ATCOR needs the metadata, such as the solar zenith angle and the radiometric calibration coefficients per channel. 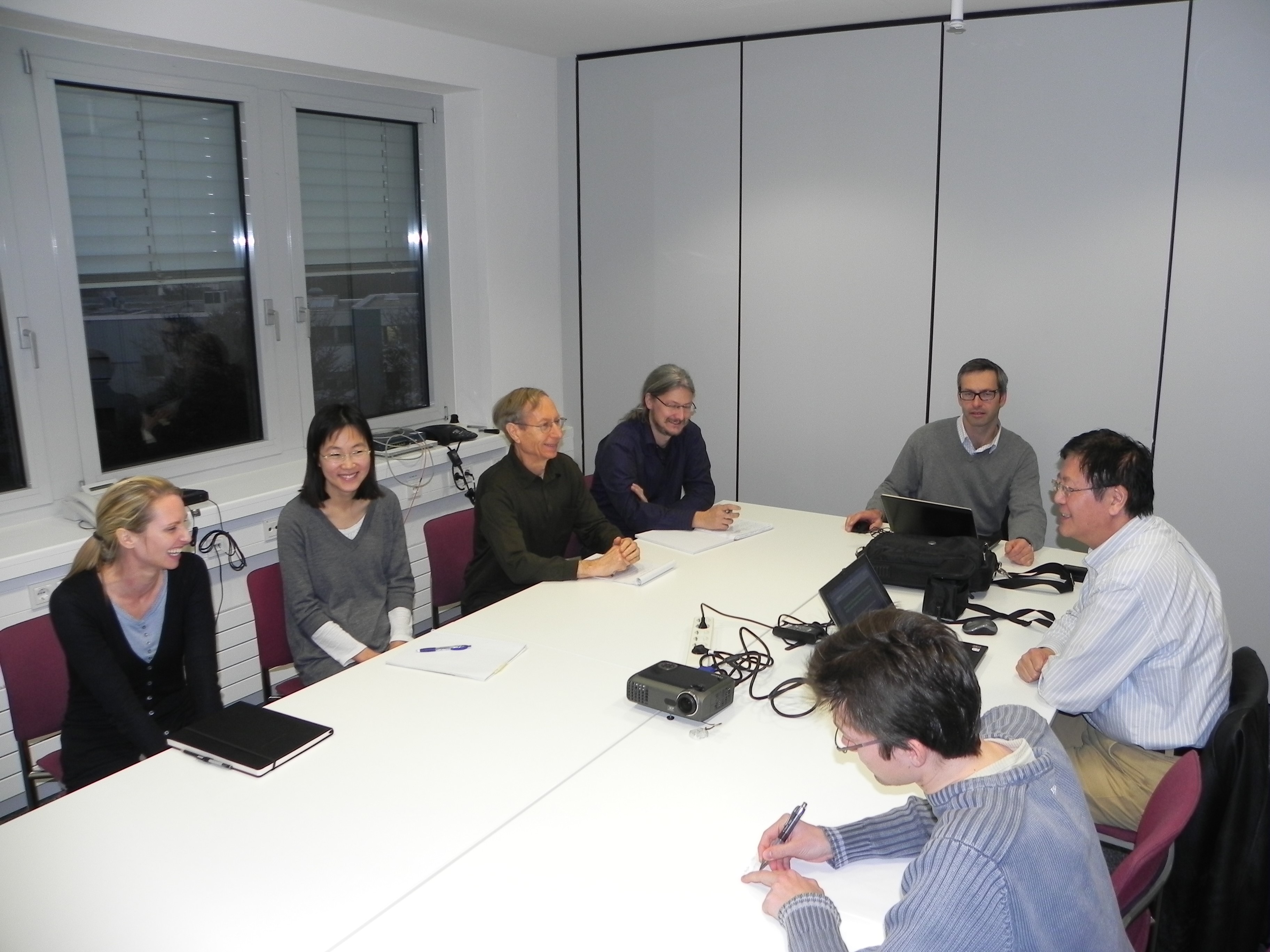 Fig. 2 shows the histograms of bands 1 to 3, evaluating only those pixels classified as haze, i.e. the yellow areas of Fig. 1(b). The histograms show that the largest haze removal effect occurs in the blue band, as expected. It can also be observed that CMSAT generally performs a stronger reduction of the brightness DN values than ATCOR. This holds for all three bands and with the exception of only a few pixels for all haze intensity levels. Remark concerning CMSAT: the demonstration here is a fully automatic result, the haze thickness can be adjusted easily in later iteration steps based on the visualization or quantitative analysis.

At this stage it is difficult to say which results are closer to reality, therefore we just state that there are differences between both methods.

In the ATCOR approach, the verification is usually performed on the surface reflectance level, i.e. after de-hazing and atmospheric correction. Then histograms of certain classes (e.g. coniferous forest, asphalt, water) from clear parts of the scene and from the de-hazed parts can be automatically compared. However, this is not possible with the CMSAT approach, but CMSAT can do a similar adjustment if prior information (for instance from a very clear scene of the area) is available. Fig. 4 shows the histograms of bands 1 to 3, evaluating only those pixels classified as haze, i.e. the yellow areas of Fig. 3(b). Contrary to the previous scene, ATCOR usually reduces the brightness level of haze pixels more than CMSAT in all three bands.

This is a sub-scene from a mountainous area inChinacontaining haze with spatially varying intensity. Figures 5, 6 show results when haze removing the large ETM scene (8261 x 7301 pixels), and then taking a small sub-scene. Figures 7, 8 present ATCOR results when the haze removal is conducted on the small region of Fig. 5. Both results differ because the assessment of clear and hazy depends on the scene content.

Fig. 6 shows the histograms of bands 1 to 3 corresponding to Fig. 5. Fig. 6: Histograms of the ETM China scene corresponding to Fig. 5. The results of both ATCOR processing versions (full scene processing, then sub-setting, compared to starting with the small subset) differ because of the different clear / haze region results.

The spatial distribution of haze in this scene is not uniform and CMSAT is not intended for this type of situation. Nevertheless, results are presented here for completeness to show all scenes that were exchanged and processed during Dr Du’ s visit to DLR.

Fig. 9 presents the corresponding statistical results of bands 1 to 3 with the original distribution of DN values and the DN distribution of the two processed scenes after haze removal. The peaks of the histograms of the CMSAT processing closely agree with those of the original histograms, because CMSAT is designed and developed for situations with uniform and slowly varying haze distributions. Four small subsets of satellite scenes with haze were processed as a first step of a potential cooperation between DLR and KSKY. It seems each approach has certain advantages and drawbacks, so a combination of both approaches is an interesting avenue for a future cooperation. This effort will require the processing of a substantial amount of hazy and clear scenes (at least a few hundreds) to improve the current algorithms and develop a robust method that is suitable for an operational and fully automatic processing.

The CMSAT haze removal is a different concept from ATCOR and provides another choice when the metadata or IR channels are not available. CMSAT even works if only one band is available (e.g., panchromatic data). So far, CMSAT can mainly be used to the slow variation of the haze distribution and overall scene spatial scales processing. The further development of the CMSAT haze removal will be the adaptive haze removal in the whole scene, which can be a powerful parallel and complementary package to ATCOR.

As Dr. Geile pointed out, the complementary properties of ATCOR and CMSAT could be used as sketched in Fig. 10: 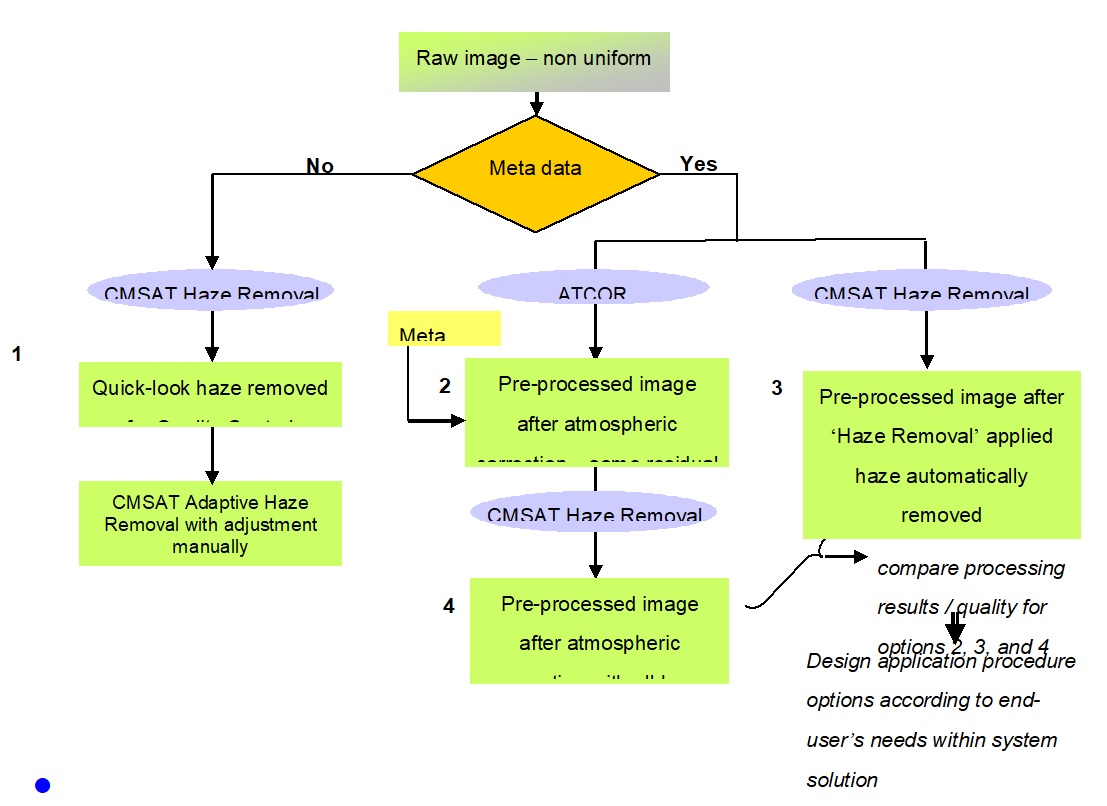