From Wikipedia, the free encyclopediaJump to navigationJump to search 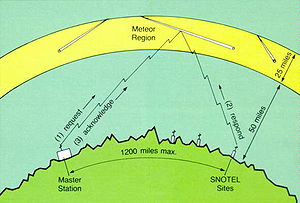 Meteor burst communications (MBC), also referred to as meteor scatter communications,[1] is a radio propagation mode that exploits the ionized trails of meteors during atmospheric entry to establish brief communications paths between radio stations up to 2,250 kilometres (1,400 mi) apart.

As the earth moves along its orbital path, billions of particles known as meteors enter the earth's atmosphere every day, a small fraction of which have properties useful for point to point communication.[2] When these meteors begin to burn up, they create a trail of ionized particles in the E layer of the atmosphere that can persist for up to several seconds. The ionization trails can be very dense and thus used to reflect radio waves. The frequencies that can be reflected by any particular ion trail are determined by the intensity of the ionization created by the meteor, often a function of the initial size of the particle, and are generally between 30 MHz and 50 MHz.[3]

The distance over which communications can be established is determined by the altitude at which the ionization is created, the location over the surface of the Earth where the meteor is falling, the angle of entry into the atmosphere, and the relative locations of the stations attempting to establish communications. Because these ionization trails only exist for fractions of a second to as long as a few seconds in duration, they create only brief windows of opportunity for communications.[citation needed]

The earliest direct observation of interaction between meteors and radio propagation was reported in 1929 by Hantaro Nagaoka of Japan. In 1931, Greenleaf Pickardnoticed that bursts of long distance propagation occurred at times of major meteor showers. At the same time, Bell Labs researcher A. M. Skellett was studying ways to improve night-time radio propagation, and suggested that the oddities many researchers were seeing were due to meteors. The next year Schafer and Goodall noted that the atmosphere was disturbed during that year's Leonid meteor shower, prompting Skellett to postulate that the mechanism was reflection or scattering from electrons in meteor trails. In 1944, while researching a radar system that was "pointed up" to detect the V-2 missiles falling on London, James Stanley Hey confirmed that the meteor trails were in fact reflecting radio signals.

In 1946 the US Federal Communications Commission (FCC) found a direct correlation between enhancements in VHF radio signals and individual meteors. Studies conducted in the early 1950s by the National Bureau of Standards and the Stanford Research Institute had limited success at actually using this as a medium.[citation needed]

The first serious effort to utilize this technique was carried out by the Canadian Defence Research Board in the early 1950s.[citation needed] Their project, "JANET", sent bursts of data pre-recorded on magnetic tape from their radar research station in Prince Albert, Saskatchewan to Toronto, a distance exceeding 2,000 km. To burst the data, a 90 MHz "carrier" signal was monitored for sudden increases in signal strength, signalling a meteor, which triggered a burst of data. The system was used operationally starting in 1952, and provided useful communications until the radar project was shut down around 1960.[citation needed]

One of the first major deployments was "COMET" (COmmunication by MEteor Trails), used for long-range communications with NATO's Supreme Headquarters Allied Powers Europe headquarters. COMET became operational in 1965, with stations located in the Netherlands, France, Italy, West Germany, the United Kingdom, and Norway.[citation needed] COMET maintained an average throughput between 115 and 310 bits per second, depending on the time of year.[citation needed]

Meteor burst communications faded from interest with the increasing use of satellite communications systems starting in the late 1960s. In the late 1970s it became clear that the satellites were not as universally useful as originally thought, notably at high latitudes or where signal security was an issue. For these reasons, the U.S. Air Force installed the Alaska Air Command MBC system in the 1970s, although it is not publicly known whether this system is still operational.[citation needed]

A more recent study is the Advanced Meteor Burst Communications System (AMBCS), a testbed set up by SAIC under DARPA funding. Using phase-steerable antennas directed at the proper area of the sky for any given time of day, the direction where the Earth is moving "forward", AMBCS was able to greatly improve the data rates, averaging 4 kilobits per second (kbit/s). While satellites may have a nominal throughput about 14 times greater,[citation needed] they're vastly more expensive to operate.

Additional gains in throughput are theoretically possible through the use of real-time steering. The basic concept is to use backscattered signals to pinpoint the exact location of the ion trail and direct the antenna to that spot, or in some cases, several trails simultaneously. This improves the gain, allowing much improved data rates. To date,[when?] this approach has not been tried experimentally, so far as is known.[citation needed]

The United States Department of Agriculture (USDA) uses meteor scatter extensively in its SNOTEL system. Over 800 snow water content gauging stations in the Western United States are equipped with radio transmitters that rely upon meteor scatter communications to send measurements to a data center. The snow depth data collected by this system can be viewed on the Internet.[4]

In Alaska, a similar system is used in the Alaskan Meteor Burst Communications System (AMBCS), collecting data for the National Weather Service from automated weather stations, as well as occasional data from other US government agencies.

Most meteor scatter communications is conducted between radio stations that are engaged in a precise schedule of transmission and reception periods. Because the presence of a meteor trail at a suitable location between two stations cannot be predicted, stations attempting meteor scatter communications must transmit the same information repeatedly until an acknowledgement of reception from the other station is received. Established protocols are employed to regulate the progress of information flow between stations. While a single meteor may create an ion trail that supports several steps of the communications protocol, often a complete exchange of information requires several meteors and a long period of time to complete.

Any form of communications mode can be used for meteor scatter communications. Single sideband audio transmission has been popular among amateur radiooperators in North America attempting to establish contact with other stations during meteor showers without planning a schedule in advance with the other station. The use of Morse code has been more popular in Europe, where amateur radio operators used modified tape recorders, and later computer programs, to send messages at transmission speeds as high as 800 words per minute. Stations receiving these bursts of information record the signal and play it back at a slower speed to copy the content of the transmission. Since 2000, several digital modes implemented by computer programs have replaced voice and Morse code communications in popularity. The most popular program for amateur radio operations is WSJT, which was written explicitly for meteor scatter communications.